Acron, one of the world’s largest producers of compound fertilizers based in Russia, and Haldor Topsoe A/S (Lyngby, Denmark) completed the ammonia unit revamp project and successfully passed guarantee test runs to confirm the capacity of 2500 metric tons per day (m.t.d) of ammonia.

The Ammonia-4 plant operated by Acron company is one of the largest ammonia units in Europe. It is a major investment project of Acron’s site in Novgorod city, and it was the first ammonia plant built by Russian specialists without support from foreign workforce. The plant was commissioned in 2016, and total investment reached $500 million. In late 2017, it was decided to revamp the plant and reach 2,500 m.t./d capacity. 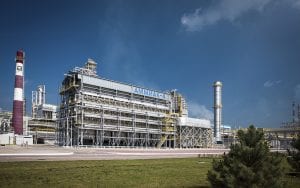 The Ammonia-4 plant operated by Acron company is one of the largest ammonia units in Europe. (Photo: Acron)

Topsoe specialists developed a project that involved another Heat Exchange Reformer (HTER), changes to the CO2 Removal Section, and other modifications.   Despite the obstacles and travel restrictions seen in 2020, the team of Acron engineers and Topsoe specialists working hundreds of miles apart, enabled the revamp of Ammonia-4, and after a successful overhaul in November 2020, the plant reached the capacity of over 2,500 m.t./d.

”Haldor Topsoe and Acron have been in a successful partnership for quite a while and the revamp project, that delivered in November 2020, marked another milestone in our cooperation. We believe our companies’ partnership will develop further for the benefit of both companies,” said Peter Vang Christensen, Managing Director of Haldor Topsoe’s Moscow office.

Aleksandr Popov, Chairman of the board of Acron, said: “boosting the Ammonia-4 plant is an important project of Acron Group’s investment program. Increasing its capacity will allow to sufficiently increase production of nitrogenous and compound fertilizers on our Novgorod site.”

A conversation with Adm. Charles Richard