BWX Technologies Is A Good Stock Waiting For A Catalyst (NYSE:BWXT)


BWX Technologies (BWXT) plays a key and overlooked role in the nation’s defense and aerospace strategies.

In its 2018 National Defense Strategy, the U.S. Department of Defense defined China as a strategic competitor. Over the past five years, the Chinese People’s Liberation Army Navy (PLAN) has expanded its worldwide influence by bolstering the size and range of its ships, including expanding its submarine capabilities.

The U.S. Department of Defense has responded with a strategy that includes “rebuilding military readiness as we build a more lethal Joint Force”.

“In support of the National Security Strategy, the Department of Defense will be prepared to defend the homeland, remain the preeminent military power in the world, ensure the balances of power remain in our favor, and advance an international order that is most conducive to our security and prosperity.”

BWXT complements that strategy by supplying the U.S. Navy with nuclear reactor propulsion systems, which serve as the major segment of the company’s business.

For good or ill, BWX Technologies is tied to the fate of a nuclear future. Since separating the power generation into a separate company, now carrying the name Babcock & Wilcox (BW), BWXT has continued to tie its future to nuclear energy, most significantly in the areas of aerospace and defense.

The company has recently reorganized its three operating groups, which now include:

NOG accounted for nearly 80% of the company’s revenue in 2019 with most of this coming from government contracts related to nuclear submarines and other nuclear-powered naval vessels. 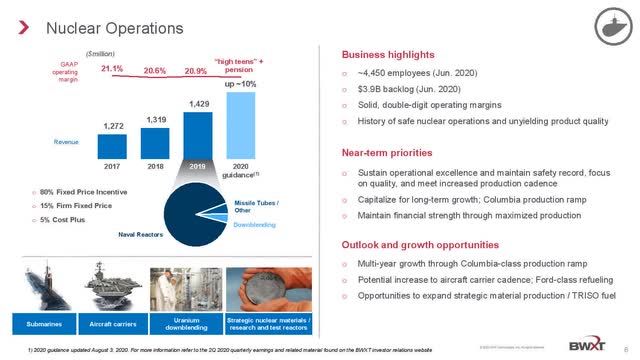 Aerospace and defense stocks are currently out of favor.

The iShares U.S. Aerospace & Defense ETF (ITA) is down 25% year-to-date while the S&P 500 is up 7%, but regardless of who becomes President, unless investors think the U.S. will be unilaterally disarming in 2021, there is space for contrarian investment in the defense portion of this sector.

Although the company’s stock has lagged the overall S&P 500, it is ahead of others in its sector, as measured by the ITA ETF.

Another way to compare is to position BWXT against a better-followed stock in the defense industry. While BWXT’s stock price is down 7% year-to-date compared to Lockheed Martin Corporation (LMT), which is down almost 4%, BWXT’s price is doing better than Northrop Grumman (NOC), which is down 10%.

From a financial standpoint, BWX Technologies is solid with steadily increasing revenue and net income along with a supportable debt load.

In August, the company raised its 2020 full-year non-GAAP EPS guidance to a range of $2.80-$2.90 and increased the Nuclear Operations Group segment revenue guidance to ~10% growth. 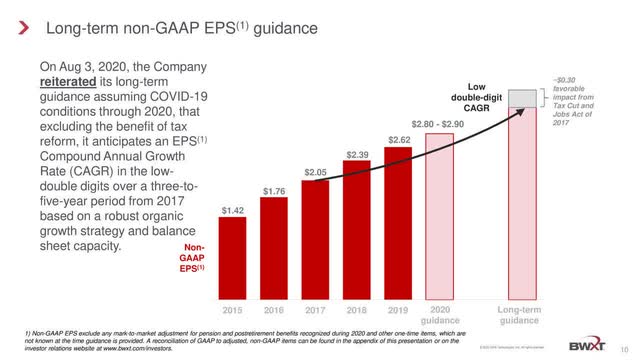 Broken down by division, most of the company’s revenue and earnings continue to come from its core nuclear operations. 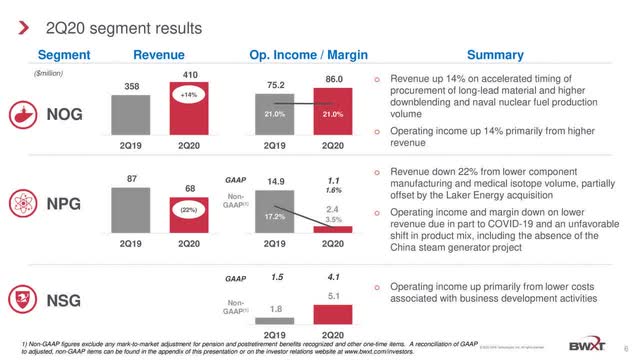 As befits a conservative engineering-based approach, BWXT pays a current dividend of $0.19 per quarter for a yield of under 2%, which might go up a penny or two in 2021.

A word of caution about debt

Both Moody’s and S&P rate the company just below investment grade with ratings of Ba2 and BB, respectively. While debt is not excessive, it is at a significant level with a debt-to-equity ratio north of 160%, which might make some investors uncomfortable. 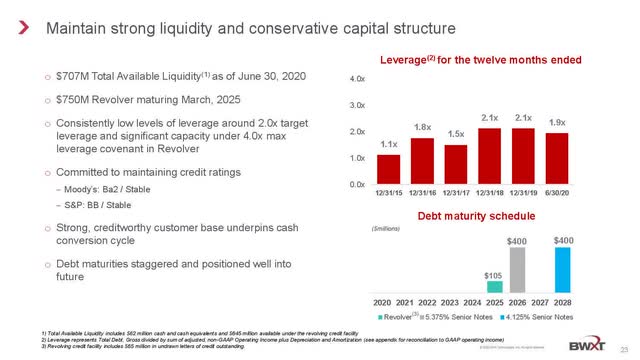 Opportunities for the future

Playing to its strength – government contracts

After the fall of the Soviet Union, the U.S. Navy found itself virtually unchallenged on the world’s oceans, but China is rapidly eroding the U.S.’s leadership in naval combat ships.

In response, the U.S. Department of Defense is planning for the future.

“First of all, to frame it, the discussion if you will, you’re right, last week I introduced what we call Battle Force 2045. It’s what I did earlier this year where I stopped an ongoing process, and said, look, we need to take a new look at what the future fleet might be in the year 2045, which is a few years before the — before the Chinese military wants to have a world — what they call a world-class military. What is the force we need to build in order to make sure that we can compete with them, but if competition and deterrence fails, we’re able to fight and win?

And what it took us to is we looked at key attributes, as we needed more submarines; we needed a larger fleet, but composed of smaller combatants. We need to still have a carrier presence of course. We needed distributed lethality. We needed greater survivability. There were a number things, and so it produced this fleet of 500-plus ships, a combination of manned and unmanned, to make sure that we could do that, that we can fight and win in the years ahead. And then do all of the other stuff, the forward presence, control sea lanes, and then reassure our allies and partners.”

Any rapid buildup of the U.S. Navy, and especially its nuclear submarine fleet, will benefit BWXT.

Near-earth orbit satellites are solar powered, but there is increasing interest in space travel, perhaps to Mars, which makes nuclear power the preferred option.

Defense Advanced Research Projects Agency (DARPA) is researching the use of using nuclear thermal propulsion (NTP) to travel from the Earth to the Moon. 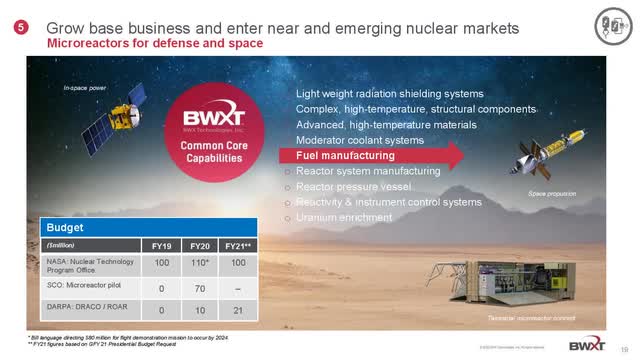 NASA Administrator Jim Bridenstine has lauded the technology’s potential for crewed Mars exploration, for example, noting that NTP-powered spacecraft could get astronauts to the Red Planet in just three to four months — about half the time needed with traditional chemical rockets”, according to Space.com.

The U.S. is not alone in exploring new opportunities in space. Russia is making noises about development of a nuclear-powered space transport in a project officially known as the Transport and Energy Module (TEM).

Given BWX Technologies’ close ties to the U.S. government, no doubt the company will be deeply involved in any United States nuclear propulsion efforts in space.

The use of nuclear reactors in the utility sector in the U.S. is a declining business, but BWXT’s involvement in this area has fallen since completed the divestiture of its U.S. nuclear services business this summer to the French company, Framatome.

Currently, its main civilian activities include:

Small modular reactors (SMRS) are meant for power generation without many of the problems that plague today’s large nuclear plants including lower costs and advanced safety features.

Ontario Power Generation (OPG) is working towards deployment of SMRs in Canada, and BWXT Canada has signed a memorandum of understanding (MOU) related to the project and is participating as part of the project’s supply chain. 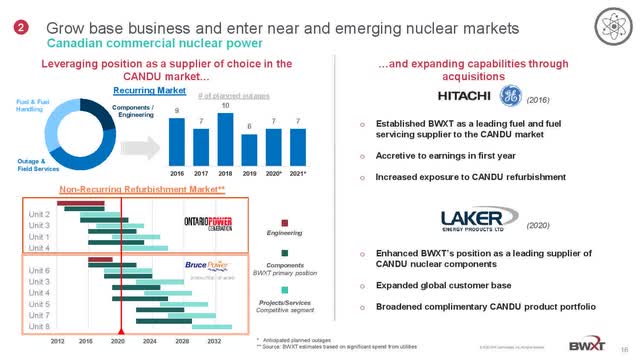 There are still many questions about whether SMRs will be accepted by the public, but if the business in Canada grows, then BWX Technologies will be a part of it.

For the present, BWX Technologies can continue to produce acceptable revenue and profit numbers based on their current business with the U.S. government.

At its current valuation, with a forward P/E of 20, there are few compelling reasons to rush into the stock, especially if the market, as a whole, drops precipitously, as it did in March.

The real investment opportunity will occur if government policy shifts to the construction of more nuclear-powered ships to stay ahead of the rapidly expanding Chinese navy, or if the U.S. government makes a firm commitment to expand space exploration.

Likewise, if the Canadian government decides to expand its defense role in the Artic or aggressively pursue SMRs, BWX Technologies will be a likely beneficiary.

Aerospace and defense stocks are currently out of favor with investors, but that won’t last forever.

Civilian applications of nuclear energy are likewise experiencing a downturn in public and investing sentiment. Whether that trend continues remains to be seen.

BWX Technologies will be a logical winner in any upturn in the activities mentioned above, and that is something for the long-term investor to consider.

Disclosure: I/we have no positions in any stocks mentioned, and no plans to initiate any positions within the next 72 hours. I wrote this article myself, and it expresses my own opinions. I am not receiving compensation for it (other than from Seeking Alpha). I have no business relationship with any company whose stock is mentioned in this article.

Major green-methanol complex to be built in Belgium