Perovskites are materials made up of organic compounds bound to a metal. Propelled into the forefront of materials’ research because of their structure and properties, perovskites are earmarked for a wide range of applications, including in solar cells, LED lights, lasers, and photodetectors.

That last application, photo – or light – detection, is of particular interest to scientists at EPFL’s School of Basic Sciences who have developed a perovskite that can detect gamma rays. Led by the labs of Professors Laszlo Forro and Andreas Pautz, the researchers have published their work in Advanced Science.

“This photovoltaic perovskite crystal, grown in this kilogram size, is a game changer,” says Forro. “You can slice it into wafers, like silicon, for optoelectronic applications, and, in this paper, we demonstrate its utility in gamma-ray detection.”

Gamma-rays are a kind of penetrating electromagnetic radiation that is produced from the radioactive decay of atomic nuclei, e.g., in nuclear or even supernovae explosions. Gamma-rays are on the shortest end of the electromagnetic spectrum, which means that they have the highest frequency and the highest energy. Because of this, they can penetrate almost any material, and are used widely in homeland security, astronomy, industry, nuclear power plants, environmental monitoring, research, and even medicine, for detecting and monitoring tumors and osteoporosis.

But exactly because gamma rays can affect biological tissue, we have to be able to keep an eye on them. To do this, we need simple, reliable, and cheap gamma-ray detectors. The perovskite that the EPFL scientists developed is based on crystals of methylammonium lead tribromide (MAPbBr3) and seems to be an ideal candidate, meeting all these requirements.

Perovskites are first “grown” as crystals, and the quality and clarity of the crystals determines the efficiency of the material when it is turned into thin films that can be used in devices like solar panels.

The perovskite crystals that the EPFL scientists made show high clarity with very low impurities. When they tested gamma-rays on the crystals, they found that they generated photo-carriers with a high “mobility-lifetime product”, which is a measurement of the quality of radiation detectors. In short, the perovskite can efficiently detect gamma rays at room temperatures, simply by resistivity measurement.

The MAPbBr3 part of the “metal halide” family of perovskites, meaning that, unlike market-leading crystals, its crystals can be grown from abundant and low-cost raw materials. The synthesis takes place in solutions close to room temperature without needing expensive equipment.

Of course, this is not the first perovskite made for gamma ray-detection. But the volume of most lab-grown metal halide perovskites used for this is limited to about 1.2 ml, which is hardly scalable to commercial levels. However, the team at EPFL also developed a unique method called ‘oriented crystal-crystal intergrowth’ that allowed them to make a whole liter of crystals weighing 3.8 kg in total.

“Personally, I enjoyed very much to work at the common frontiers of condensed matter physics, chemistry and reactor physics, and to see that this collaboration could lead to important application to our society,” says Pavao Andricevic, the lead-author.

Stellar Chemistry, The Universe And All Within It 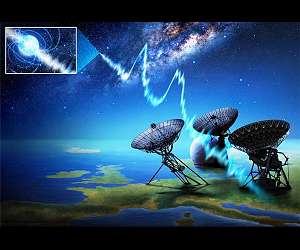 
By studying the site of a spectacular stellar explosion seen in April 2020, a Chalmers-led team of scientists have used four European radio telescopes to confirm that astronomy’s most exciting puzzle is about to be solved. Fast radio bursts, unpredictable millisecond-long radio signals seen at huge distances across the universe, are generated by extreme stars called magnetars – and are astonishingly diverse in brightness.

For over a decade, the phenomenon known as fast radio bursts has excited and … read more