A collaboration of scientists from around the world have been named the winners of the Royal Society of Chemistry’s new Environment, Sustainability and Energy Division Horizon Prize: John Jeyes Award.

Led by scientists at Imperial College London, Chalmers University, University of Copenhagen, Technical University of Denmark, University of Calgary, and BASE Life Science, the ‘HPNow’ team receives the prize for scientific and engineering breakthroughs that have enabled hydrogen peroxide synthesis to become a commercial and industrial reality. This new method allows hydrogen peroxide, an environmentally friendly chemical for treating water, to be made on-site and on-demand.

They become one of the first winners of the Royal Society of Chemistry’s new Horizon Prizes, introduced after the organization carried out a wholesale review of its recognition portfolio to better reflect modern science and its impacts in making the world a better place. 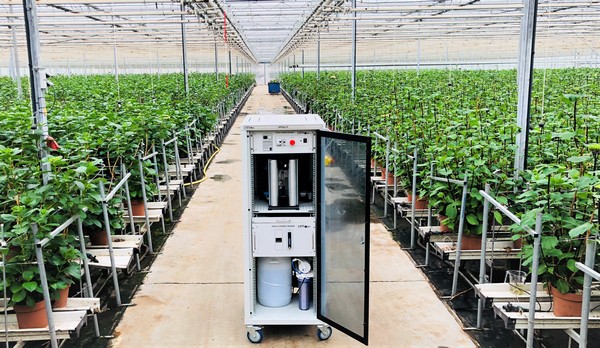 Honored
After receiving the prize, Ifan E.L. Stephens, Reader in Electrochemistry at Imperial College London, said: “We feel incredibly honored to be amongst the first recipients of the Royal Society of Chemistry’s Horizon Prize. Since our work was such a collaborative effort, we feel the format of the prize – where it is awarded to the entire team – was particularly appropriate.”

The team made the scientific and technical breakthroughs that enable hydrogen peroxide to be produced on-site and on-demand using solely water, electricity, and air as inputs in a device known as an electrolyzer. The project resulted in the establishment of the company HPNow, which sells commercial electrolyzers for water treatment.

This new method allows hydrogen peroxide, an environmentally friendly chemical for treating water, to be made on-site and on-demand. The device sits in water, can pump in oxygen, catalyze hydrogen peroxide generation and pump out the product diluted in water. The reaction happens under constant flow – removing the products and adding new reagents – allowing the reaction to continue at maximum turnover.

Safety benefits
Before now, most hydrogen peroxides had been produced at high concentrations, with transportation proving to be a hazard risk. However, this new electrolyzer is able to be inserted into the water at treatment plants, delivering hydrogen peroxide on-site in an energy-saving manner.

HPNow has installations in over 15 countries around the world, treating water at both hospitals and agricultural sites. The company has also opened an emission-free hydrogen peroxide production plant in Spain which uses solar power. Through this, the team is hoping that this technology will inspire more decarbonization in the industry.

Dr. Helen Pain, Chief Executive of the Royal Society of Chemistry, said: “Scientific discovery opens fascinating new frontiers, and we are proud to recognize those whose discoveries push the boundaries of knowledge and its application and motivate others to follow in their footsteps.

“The astonishing achievements of the HPNow team are simply inspirational, and it is our pleasure and honor to recognize this by presenting this much-deserved prize. In an era defined by the pandemic, where the contribution of chemical scientists has never been more clear, this achievement is truly a cause for celebration.”

More information is available at: rsc.li/prizes.

The directed energy weapon market is valued at USD 4.3

Foundation recognized as ‘Friend of Education’