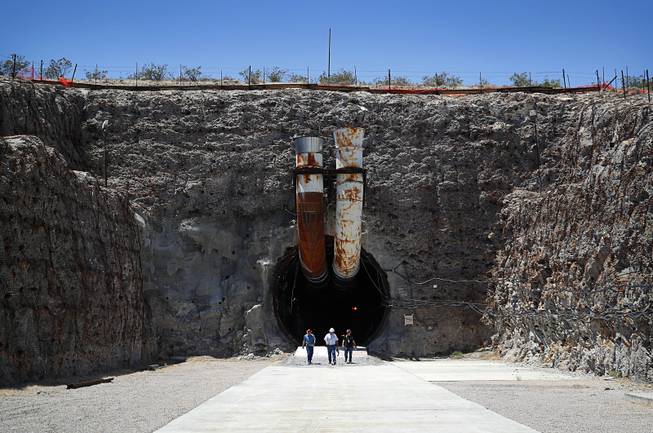 In this July 14, 2018, photo, people leave the south portal of Yucca Mountain during a congressional tour near Mercury. Several members of Congress toured the proposed radioactive waste dump 90 miles northwest of Las Vegas.

Thanks to the diligence of Nevada state and congressional leaders, the state has rebuffed another attempt by the U.S. Department of Energy to stuff radioactive waste down our throats.

This time around, the feds agreed to settle a lawsuit over several nonpermitted shipments of waste to Nevada that were revealed in 2019.

Those shipments, which occurred from 2013 to 2018, involved materials that the feds had mislabeled and mischaracterized as low-level waste.

In 10 shipments to the Nevada National Security Site, the government unloaded 33 packages of waste on us.

The settlement will result in Nevada receiving $65,000 from the feds, but its symbolic meaning is much more valuable. Coming about a year after the June 2020 settlement of a similar suit involving a secret shipment of weapons-grade plutonium to Nevada in 2018, it shows that we won’t let the DOE sneak anything by us.

For this, several people deserve a tip of the cap. They include Gov. Steve Sisolak, Nevada Attorney General Aaron Ford and state staff members who, upon learning about the shipments, worked together to form a successful legal strategy in response.

Meanwhile, the entire Southern Nevada congressional delegation locked arms to extract information from the Department of Energy and help shield the state from further shadiness.

And finally, the Biden administration deserves some credit, as the latest settlement was a collaborative effort between federal and state regulators.

Both agreements beef up Nevada’s protections. The 2020 settlement called for the government to remove the unwanted and unauthorized plutonium by no later than 2026, and required the DOE to give the attorney general’s office 30 days of notification before sending any more similar materials our way.

The new agreement enhances the ability of state officials to monitor efforts by the federal government to prevent shipments of unapproved waste to Nevada, while also establishing an additional monitoring well at the Nevada National Security Site.

These are all good steps toward protecting Nevada from the environmental and health risks of nuclear storage or accidents in the transportation of nuclear waste materials.

Meanwhile, our defense against the development of the Yucca Mountain Nuclear Waste Repository continues unabated.

This week, the U.S. House took a step toward starving the project of funding for fiscal year 2022, as a subcommittee that includes Rep. Susie Lee, D-Nev., approved a funding bill that doesn’t include a revival of Yucca Mountain.

That’s promising news. Nevada also is catching a break in that the Biden administration is seeking a consent-based alternative to Yucca, and that President Joe Biden himself has expressed point-black opposition to its development.

“I assure you as president there will be no storage at Yucca Mountain, period,” Biden said during an interview with the Sun editorial board before the 2020 Nevada Democratic presidential caucuses. “And it’s not just because of the instability and possibility of earthquakes, but because of the transportation to Yucca Mountain.”

Bingo. The project involves storage of highly radioactive waste that poses a threat of leaking into groundwater or being released into the air, and would be transported from points around the country straight through the heart of Las Vegas en route to Yucca. Not only does the routing present a nightmare scenario of an accident or terrorist attack in Las Vegas, it exposes millions of Americans to risk as the waste would travel along 22,000 miles of railway and 7,000 miles of highways on its way to the desert north of our community.

How things will go from here in Congress is anybody’s guess — there have been instances when the Democratic colleagues of Southern Nevada’s congressional delegates have turned against them and supported Yucca.

But at least we’re not also having to defend ourselves against a presidential administration, as we were during Donald Trump’s term. Nevada had to battle tooth and nail against both Trump and his serial liar of a DOE secretary, Rick Perry, on Yucca Mountain and other nuclear-related issues. Trump, let’s not forget, even mused about resuming above-ground nuclear tests in our backyard.

Those two are gone, though, and what remains is a firm line of opposition by Nevada state and national leadership.

In the courts and in the halls of Congress, they’re serving Nevadans well on nuclear issues.

Call for UK chemical engineering postgraduate students to apply for a Fellowship ...