Solvay S.A. (Brussels. Belgium) is constructing hectares of solar panels at its site in Linne Herten, the Netherlands, to generate its own green energy. Fully operational, Linne Herten’s 6,500 MWh solar farm provides 40% of the plant’s electricity needs and reduces its energy-related C02 emissions by approximately 17%. 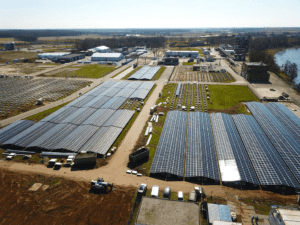 “Installing a solar farm was the perfect solution to take on our environmental responsibility and contribute to reducing Solvay’s overall emissions as outlined in our One Planet sustainability roadmap,” says Peter Otten, site manager of the Solvay Peroxides Linne Herten plant.

Located in the southeastern corner of the Netherlands, Solvay’s Linne Herten plant produces mostly peroxide-based disinfectants and a catalyst AQ. To help build and operate the solar farm, Solvay partnered with Dutch solar system installer KiesZon. The first of 22,300 solar panels were installed in early 2020. In August, Linne Herten’s solar farm will be fully operational.

Technically speaking, only one-third of the solar farm is directly connected to the plant; the rest feeds into the general grid, providing enough electricity to power 1,500 households. This new generation of solar panels makes it worthwhile to build solar farms at latitudes such as that of the Netherlands. In fact, this is Solvay’s second solar power project in Europe, the other one being at a quarry in Walcourt in neighboring Belgium.

Solvay wants to set bold objectives to solve key environmental and societal challenges through science and innovation. One of the objectives within Solvay’s One Planet roadmap is to double the rate at which it reduces emissions, with a goal of curbing total greenhouse gas emissions by 26% and aligning its trajectory with the “well below 2°C temperature increase” goal outlined in the 2015 Paris Agreement.