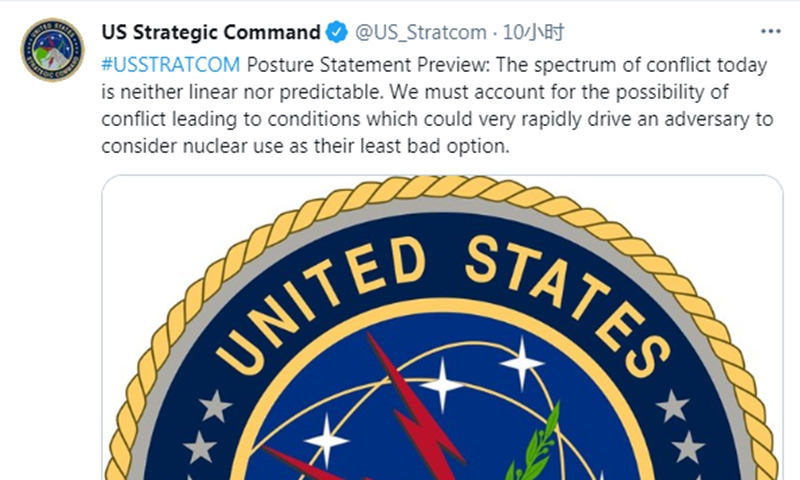 US Strategic Command issued a posture statement preview on Tuesday, saying “The spectrum of conflict today is neither linear nor predictable. We must account for the possibility of conflict leading to conditions which could very rapidly drive an adversary to consider nuclear use as their least bad option.” This is not only a warning signal meant for US policymakers, but also a tactic to try to trap its “adversaries,” such as China and Russia, into a nuclear arms race.

This posture statement preview is mainly aimed at Russia because it has updated its nuclear weapons with brand new nuclear strike approaches. For instance, the Petrel, a nuclear-powered, nuclear-armed cruise missile, is claimed to have virtually unlimited range. And Poseidon, a massive nuclear torpedo, can reportedly carry a nuclear warhead with a yield of up to 100 megatons to most parts of the world while remaining extremely deep beneath the surface.

As the US does not possess weapons with such capabilities, it is anxious.

The preview sends two messages. The US hopes to promote its defense capabilities to counter Russia’s new weapons as well as boosting its own innovation in nuclear weapon development. Meanwhile, it shows that the US attaches great significance to its own nuclear power, and it will keep investing in and upgrading its nuclear arsenal. This is a warning toward the outside would.

As a matter of fact, the possibility of an outbreak of direct nuclear conflict between the US and Russia is very low, as both countries have a considerable number of powerful nuclear weapons. If there is a nuclear clash, it will be catastrophic for both countries. Therefore, the US will definitely not make a nuclear threat against a major nuclear power. It might only aim at small- and medium-sized regional military powers. The US will probably use tactical nuclear weapons rather than weapons of mass destruction.

However, the Pentagon, including US Strategic Command, is exaggerating the possibility of a nuclear war with its rivals. They are hyping that such a nuclear war is just around the corner to get more funds to build up the US’ nuclear arsenal and develop new weapons.

Nevertheless, ties between the US and Russia do confront challenges, and the biggest stems from the breakdown in military communication. Washington has withdrawn from agreements such as the Treaty on Open Skies and the Intermediate-Range Nuclear Forces Treaty. That being said, there is basically no military communication mechanism between Washington and Moscow. As the hostility and suspicion toward each other spirals up, some senior officials from the Pentagon consider Russia to be increasingly dangerous. In their opinion, some of Moscow’s innovations regarding nuclear weapons are directed against Washington, and the weapons may even be used against the US at any time.

So this preview is made based on mistrust and suspicion toward Russia. Such sentiment could lead to a nuclear arms race.

Besides, the US Strategic Command has also been hyping up the possibility of a nuclear war with China. In February, head of the command Charles Richard warned that “there is a real possibility that a regional crisis with Russia or China could escalate quickly to a conflict involving nuclear weapons.” As China develops its conventional military power and Moscow restores its, Washington’s conventional forces are losing their overwhelming advantage compared with the other two.

Out of fear that the US could be defeated in a future large-scale conventional war, the country is turning to focus more on nuclear options. This reflects the US’ lack of confidence in its conventional military forces.

The US does want to provoke a nuclear arms race. The cost of a full-scale nuclear upgrade is astronomical. If more advanced nuclear weapons are produced,  maintenance and security costs are also high. The US has enough budget, plus it enjoys its dollar hegemony and can print money at any time when needed, so it hopes to provoke the race and draw China and Russia in. Such a race will consume a large proportion of their military spending, and might even undermine their economic strength.

However, China and Russia are not buying it. Taking China as an example, its nuclear weapons are designed for defense. It is not interested in competing with the US in terms of quantity or performance of the nuclear weapons. This US strategy once wore down the Soviet Union during the Cold War. China will not be fooled by the same trick.

The author is a Beijing-based military analyst. opinion@globaltimes.com.cn

Impact of COVID-19 ‘Safer at Home’ order on radiology utilization